The company NOCH was founded 1911 in Glauchau (Saxon) by Oswald Noch, the great-grandfather of the current Managing Director. The family concern that has been managed by the owners over generations has advanced together with the employees to a specialist in model landscaping.
The NOCH logo including the words "...wie im Original" obliges to manufacture realistic, life-like products...like the original prototypes in nature
The NOCH team is still striving to make the fascinating model landscaping hobby easily approachable for every modeller..

Innovative products for the most beautiful hobby in the world

The NOCH range is completed by the highlights of the assortments of our partners: ROKUHAN, KATO and Athearn. 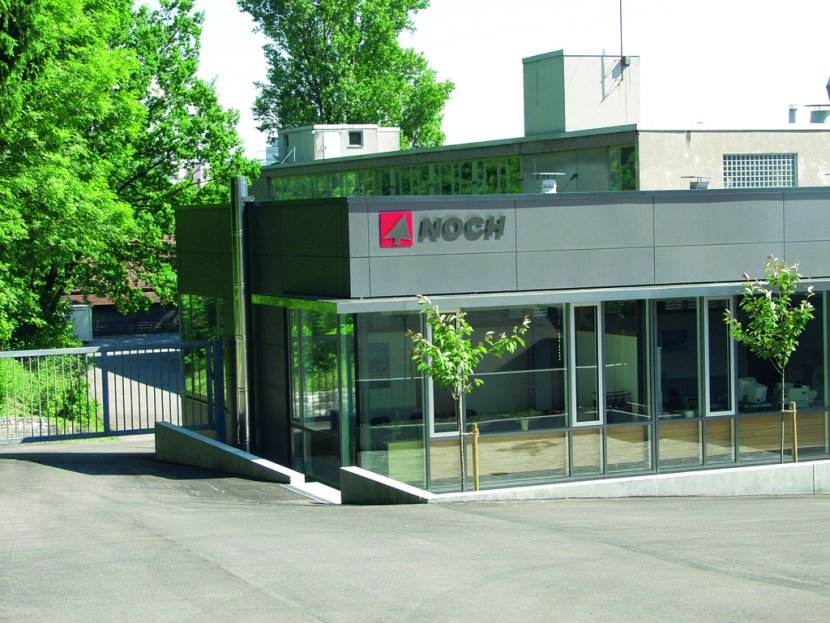 It encourages modelling and fun in schools through the Model Railway Workshop. In line with the initiative “Playing at School” (German: “Spielen macht Schule”) organized by the society “More Time for Children” the members of the Industrial Community for Model Railway Exhibitions (German abbreviation: IGEMA) have equipped several schools with a model railway workshop. The German manufacturers Auhagen, Busch, Faller, Märklin, Viessmann and NOCH are actively participating in this youth development providing their support. The Center of Neuroscience and Learning (German abbreviation: ZNL) supervises the model making materials and inspects them for their suitability in education.

In the pilot scheme 60 schools in Bavaria, Baden-Württemberg and Saxony were equipped with generous packages of modelling materials during the school year 2012/2013. Märklin supplied the tracks, the locomotives and the wagons, Auhagen, Busch, Faller and NOCH supplied materials, figures and scenery items for the building of a complete model railway layout.

First the schools had to apply for participation in the scheme by demonstrating how they could integrate a model railway into the everyday life of the school. From the beginning of the application phase it was evident that there were a lot of different ways to get the most out of a model railway workshop at school. In particularly there were ideas about working groups and afternoon care hours as well as a direct integration into school subjects including handicrafts and physics.

In the school year 2013/2014 the model railway workshop entered its second round and another 60 schools have been sponsored.

After the successful conclusion of the pilot scheme schools in other German states such as North Rhine-Westphalia were also included. Once again, exciting concepts and educational ideas were submitted and the best 60 of them have been supplied with packages of modelling materials to make more model railway layouts.

The results from the first year were that the teachers, the pupils and the parents were very enthusiastic about this initiative. At many schools the model railway layout had been used also for other purposes than was originally planned. For example, a teacher told us that they used the layout in the English lesson to teach vocabularies like “building” or “street” or to think up short stories in English. Often the parents and grandparents helped to build the layout. In one case a grandfather bequeathed his own model railway collection so that the pupils of one school had more materials for playing and modelling.

In 2014/2015 a Model Railway Workshop will be established at another 60 selected schools. Besides the German manufacturers Auhagen, Busch, Faller, Märklin and NOCH the company Viessmann will participate as a new member of this initiative. To assist in the organization of this project the Industrial Community for Model Railway Exhibitions works along with the manufacturers.

You will find more information (in German language) about the initiative "Playing at School" here.

Your wishlists
Loading...
By clicking on "Accept" you revocably agree at any time that NOCH GmbH & Co.KG and third parties use cookies and similar technologies to optimize the website and create user profiles and to display interest-based advertising. At the same time, you agree to the processing of your data in unsafe third countries: USA. Information on the associated risks can be found in the Privacy Policy under 7.1. Configuration options and further information can be found under "More". The refusal does not activate the technologies used, with the exception of those that are essential for the operation of the pages. Further information on the person responsible can be found in the Imprint. Information on the processing purposes and your rights, in particular the right of withdrawal, can be found in our data protection declaration .